In May, a group of St. Philip’s “Seasoned” Singles toured the Richard F. Caris Mirror Lab at the UA Steward Observatory. An international consortium of leading universities and science institutions is working to build and establish the Giant Magellan Telescope, which will be mounted on a mountain site (elevation 8800 ft., about the elevation of our Mt. Lemmon) in Chile. This will be the largest, most powerful earth-based telescope in the world. It will be composed of seven giant mirrors; the mirrors are being made here at UA. The arrangement looks like a simple flower sketch, a center and six mirrors encircling that center. Scientists expect that it will revolutionize our view and understanding of the universe. They plan to have the telescope in operation by 2022.

Our tour began with a video and narration by a volunteer giving background about the observatory and the current project. Then we were taken through the huge, open, three-story actual production area. We were awed by the intelligence and creativity that it has taken to be able to make the seven mirrors planned for the one telescope. Right here, under UA’s football stadium!

To make one mirror, almost 58,000 pounds of the purest glass is loaded onto a circle of what looks like a giant honeycomb and is heated in a heavy-looking red “oven” until it melts over this base. It takes months to heat and more months to cool. Then the disk is moved to a polishing site. After meticulous cleaning, a revolutionary new method to polish the mirror will finish it to a deeply curved parabolic surface. 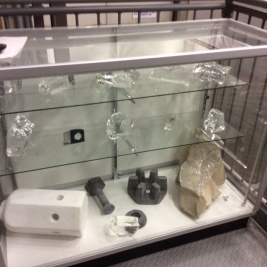 The Mirror Lab has made other mirrors, but these will be the largest — 27 ft. in diameter — and most special. One mirror is finished and two almost ready; the fourth is “in the oven.” Eventually the mirrors will be transported by truck to Long Beach, California, and carried by boat to Chile. The size of the mirrors is limited by the width of our roads and the heights of bridges, overpasses, etc. The mirrors must travel horizontally (parallel to the road’s surface) to be safe.

Ed Alexander made the arrangements for us after experiencing the tour himself during the Book Fair weekend. Tours appear to be available most days of the week. The cost per person was $18. We concluded our outing with lunch at the UA Student Union.