The Order of the Daughters of the King held its 46th annual international Triennial convention in Midway, Utah, from June 19 to 23, 2015. Elizabeth Weber and Nancy Williams attended as representatives from the St. Philip’s DoK Faith Chapter. Almost 500 women from 16 countries were present, representing the total 25,315 Daughters in 21 countries. The theme was “Shining the Light of Christ.” The setting was the Zermatt/Homestead resort at the base of the beautiful Wasatch Mountains, about half an hour from downtown Salt Lake City. 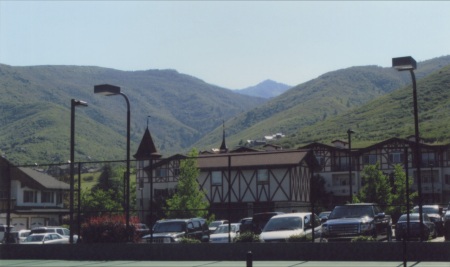 So what happens at a DoK Triennial? On the leadership side of things, six new national officers and nine new council members are elected every 3 years. An unusual method is employed for the selection of the Executive Board. The candidates who feel led by Spirit to take on the role present themselves, and then the council members go up and surround and lay hands on the candidate who they in turn feel the Spirit is calling! Whoever has the most supporters gathered around them is chosen for that position.

The national council members and the resolutions are voted on by the 263 voting delegates in a more typical way. There are usually only a few resolutions up for consideration — nothing like the 350 or so that were dealt with at this last Episcopal General Convention!!

On the spiritual enrichment side of things, there were plenty of workshops offered over Triennial weekend. Daughters take vows of prayer and service, with prayer being the emphasis. This focus is apparent in various workshops: Prayer Walking; Listening as Prayer; Prayer through Song and Dance; Living Prayer through Writing, Working, and Rituals. Other topics included Inner Healing and “Why Have a DoK Chapter in Israel?”, detailing what the Jerusalem Daughters are doing to make a difference. 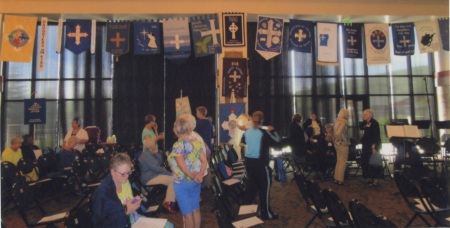 This was the 6th Triennial that Liz has attended across the U.S. over the years. One of the highlights for her this time was a keynote speech by Canon Andrew White, known as “the Vicar of Baghdad.” For many years, he has engaged in a ministry of reconciliation and conflict mediation in the Middle East. Since 1998, he has pastored St. George’s, the only Anglican church in Iraq. The other keynote speaker was the Rev. Becca Stevens, the founder of Thistle Farms & Magdalene. This is a non-profit organization benefiting women who have survived trafficking, prostitution, and addiction. We offer Thistle Farms products in our very own St. Philip’s Little Shop!

Any interested woman in the parish can attend one of our DoK Faith Chapter meetings at any time. We are always open to visitors and non-vowed attendees, as well as members who do decide to take lifetime vows. We meet second and fourth Mondays at 10:15 in the Salvia room of La Parroquia.