The Fishpond Garden has a new stone bench! It fills the previously empty niche along the south wall, and is a beautiful and practical addition to the garden. The bench is dedicated to the memory of longtime, beloved parishioner Brenda Hooper, who died in July 2013 at age 86. It is a gift from St. Margaret’s Guild to the church. Brenda was president of St. Margaret’s Guild for a number of years, until her daughter Lynn Eshelman, the current president, took over in 2003.

Ruthie Hooper, Brenda’s other daughter, had been planning to go on pilgrimage to England and Scotland in August of 2003, when her mother had a stroke. Ruthie decided to continue with the pilgrimage, and she and Lynn decided that she should take some of their mother’s ashes and scatter them on English soil. The group had a lovely service in Lindisfarne near the ocean facing Cuthbert Island. This is when the idea first came about for the bench. After inquiring about the bench in Lindisfarne, the request was turned down by the Lindisfarne Council. The blessing from that was that Brenda should be at St. Philip’s, her beloved church home … so it was meant to be. Lynn spearheaded the process of fundraising and planning for the bench, in addition to seeking approval by St. Philip’s Architectural Review Committee. 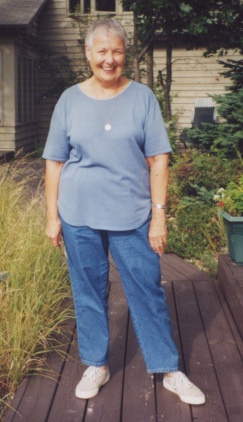 Brenda Hooper was active in several ministries over her 30 years at St. Philip’s. In addition to St. Margaret’s Guild, she was involved as an officer and then president of a weekly group called Community and Concern, which had about 100 participants at its peak. She was also a volunteer with the After-School Music Program in its earlier days before the program used a shuttle van. Back then, she and Lynn would walk to the school to pick up the kids. Outside of the church, Brenda was also affiliated for 25 years with the local chapter of Daughters of the British Empire.

Brenda was raised in Exminster, Devon County, England. She was 11 when World War II started, and the family had to take refuge under the bed during the frequent bombings. She later married an American sailor. They moved to the States and raised two children here: Lynn and her sister Ruthie, our very own beloved deacon. We might refer to this family as a St. Philip’s “mini-dynasty”!

Brenda retained many Britishisms. Every afternoon, she’d say “let’s have a nice cup of tea” — preferably P.G. Tips. At her memorial service, the Rev. Canon John Kitagawa noted that whether or not he thought he needed an update on the Royal Family, Brenda would always be sure to give him one. Her humorous catch-phrase throughout her life, renowned amongst family and friends, was “This is ridiculous!” Those even became immortalized as basically her last words — protesting the necessity of paramedics fussing over her after having the stroke. It is hoped that the eventual plaque for the bench will contain Brenda’s signature quote.

The St. Margaret’s Guild members have wonderful memories of Brenda. Comments run along the lines of: “A great one for joking … very witty, always with a good comeback”; “I felt like I’d known her forever”; “She seemed to love everybody”; “She was always enthusiastic about what we did in the group, and about England.”

The bench dedication ceremony was performed on April 26 by the Rev. Kitagawa, with Ruthie and Lynn participating. Please enjoy the bench with its picturesque surroundings of fishpond, trees, and colonnades and, as Ruthie and Lynn say, “take a moment to rest and smile along with Mum”!