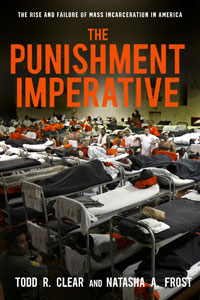 The Punishment Imperative: The Rise and Failure of Mass Incarceration in America, by Todd R. Clear and Natasha A. Frost, 2013, NYU Press

The Punishment Imperative by Todd Clear and Natasha Frost is a scholarly work, which takes a look at incarceration and post incarceration policies focusing on the last 40 years. The changes in polices over the last 40 years, they call a “grand social experiment” in how we in this country look at and deal with whom and when we place in prison, jail, or probation. This is an “experiment” which the United States has engaged in for the last 40 years. Clear and Frost look at the reasons for this “experiment” and the scope and depth of its imposition (how it has and is affecting the numbers of people in incarceration and in parole). Clear and Frost say, “Like a drunk whose life descends increasingly into the abyss, U.S. penal policies grew steadily and inexorably toward an ever harder edge.” Prison populations increased to over 7% — 5.6 million of the world’s ten million incarcerated people are in prisons and jails here in the US. They describe its sources, its elements, and its consequences. This “social experiment” resulted in a growth in the prison population from about 300,000 in 1980 to over 1,500,000 in 2010 — a growth of 324 per cent. People under probation increased by similar numbers. Incarceration increases were primarily of black males. This incarceration increase did not significantly affect the crime rate.

The results of this experiment are clear. According to Clear and Frost, “… the Punishment Imperative had this main result: the criminal justice system now operates as a self-sustaining cycle of gathering increasing numbers of poor people, mostly men and mostly black, into its clutches, profoundly damaging their life chances, and returning them to communities bereft of the capacity to absorb them. It has been politically cancerous, privileging rhetoric that baits the more base public emotions rather than encouraging sound policymaking and strategic thinking. It has been a vast fiscal dark hole, guaranteeing that for generations public money must be moved from public goods such as schools, health care, and infrastructure to instead support and maintain a quasi-permanent, separate community of the incarcerated and controlled. And it has been empirically wrong, doing shockingly little about the crime problem it was originally designed to address.”

This is an eye-opener book. It pushes the reader to conclude that this country has engaged in a failed social policy which has caused harm to untold numbers of people scooped up in its maw. It continues to affect us all in fiscal demands which change the landscape of our country for us all in a negative manner. It is fully documented and it presents its argument in a convincing and incontrovertible manner.