The Rt. Rev. Kirk S. Smith, Episcopal Bishop of Arizona, along with Bishop Gerald Kicanas, Catholic Bishop of Tucson, and Bishop Steven Talmage, Grand Canyon Synod-ELCA, hosted a meeting of over 60 clergy and religious leaders, including nearly 20 Episcopalian priests and deacons, at Most Holy Trinity Catholic Church, Tucson, on August 19. The aim of the meeting was to introduce broad-based institutional organizing to clergy who have had minimal to no exposure to these types of organizations and to discuss ways congregations can work together for the common good of our community. Clergy from around the Diocese heard from the bishops, Kevin Courtney from the Pima County Interfaith Council (PCIC), and Joe Rubio from the Arizona Interfaith Network (AIN). Both groups are part of a network of independent grassroots community organizations affiliated with the Industrial Areas Foundation (IAF). 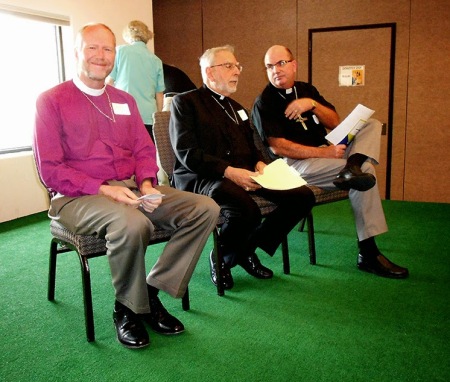 Bishop Smith started the meeting with a prayer; over lunch, attendees had intentional meetings with clergy they did not know. After lunch, Bishop Kicanas told of his own experience of attending an IAF leadership training institute in New York while he was serving in Chicago. He suggested that new clergy would be well-served by attending similar trainings scheduled this fall in Phoenix and Yuma. He encouraged clergy of all faiths to work together, especially on the issues of poverty, education, and immigration reform. 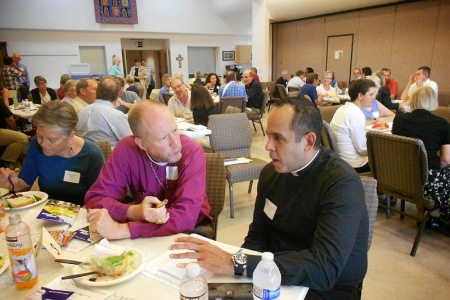 The Rev. Leah Sandwell-Weiss and the Rev. Tom Tureman of Most Holy Trinity address the group.

Representatives from parishes from Yuma to Douglas were involved since there are now four AIN groups – PCIC, Yuma County Interfaith Council, Pinal County Sponsoring Committee, and Southern Arizona Interfaith (SAI) (a sponsoring committee in Cochise, Santa Cruz and southern Pima County) working in the Diocese. Several clergy members spoke about their work with PCIC and SAI:

Clergy broke up into small discussion groups to discuss how they were involved or could become involved in community organizing. After reporting back to the larger group, we heard from Mr. Rubio about the work of AIN and how this work can empower people to bring change to their communities.

This small group included the Rev. Linda Hutson, Deacon at Grace-St. Paul’s, as well as the Rev. Leah Sandwell-Weiss.

The session concluded with a blessing from Bishop Talmage and an invitation to clergy to do listening sessions in their congregations and focus on the development and training of young leaders to transform their congregations and their communities. All were invited to attend a PCIC-sponsored Education Accountability Session with local and state candidates on Sunday, September 28, at 4:00 pm at Most Holy Trinity. Attendees agreed that the meeting was a successful introduction or re-introduction to organizing and a great way to meet clergy from other denominations.

If you are interested in more information about broad-based institutional organizing, please contact the Rev. Leah Sandwell-Weiss, Deacon, St. Philip’s In The Hills Episcopal Church.