As any member of the Ash Mob Team from last year will tell you, the sum total of the experience of imposing ashes is greater than its parts. Some of us approached ashes as a service, which it was, and believed that those we served would be grateful for the convenience of participating in the faithful spiritual tradition.

That was our narrow vision. What we actually encountered in practice was a totally transformative experience of God somehow reaching through us to use our hands and mouths to connect with those who hungered for ashes. We discovered that we were becoming the very ashes we believed we were imposing. Meeting, greeting, touching, praying, imposing ashes and connecting with the people at a level neither of us anticipated, sharing sacred moments and a few tears. 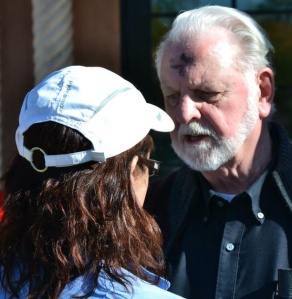 This year we invited the Prison Ministry and the LEMS (Lay Eucharistic Ministers) to join us to take ashes to people within their ministries and also to join us in the “street” ministry. Four members from each of these ministries joined us on Ash Wednesday, 2014. In total the Ash Mob numbered 16, and we served about 180 people. Some of the words used by the Ash Mob to describe our experience were: fearful, surprised, touched, humbled, joyful, beautiful, grateful, appreciative, TRANSFORMING — all of us on a common quest for God.

A few wonderful stories were shared with us during the day. A woman whose husband had died six months previously was riding the River Road Trail to the trailhead on Campbell for the first time since she was widowed. She hadn’t been able to ride “their” favorite path since his death, but on this day she did, and encountered Ashes To Go, for which she was very grateful. A number of people returned from last year, some saying they would see us again next year.

The theme of the day was a constant longing for God. The Ash Mob folks who went to the bus terminal on North Stone were asked to leave, but a man who wished to have ashes followed them to their new location, seeking a connection with God, being blessed and a blessing, and sharing his tears. A young woman who had lost custody of her three children due to drug addiction, and hadn’t seen them or heard from them for a year, longed to be clean and sober, knowing she could not return to the circumstances that led to her problems. Her prayers were heartfelt and sincere. A member of St. Philip’s who had been injured and was still unable to go to church on Sundays arrived at one of the sites looking joyful at the opportunity to receive ashes at a location closer to home.

In truth, everyone has a story, shared and held closely. We, as imposers of ashes, saw God in each and every recipient and were deeply blessed by it. Transformation occurs as the result of being a conduit between the Sacred Lord and the Sacred People. Thanks be to God.