It takes a village to raise an opera—in this case the village of St. Philip’s In The Hills Episcopal Church. Parishioners with professional credentials in voice, instrumental playing, conducting, stage management, and executive production enabled the wider Tucson community to experience Gian Carlo Menotti’s one-act work Amahl and the Night Visitors on January 11, 2014. The opera (in English) was originally commissioned by NBC and first performed by the NBC Opera Theater on December 24, 1951, in New York City at Rockefeller Center. It was the first opera specifically composed for television in America, yet Menotti wrote Amahl with the stage in mind.

The thread of Amahl wound through St. Philip’s since a first production by then–Music Director Steven Anderson in 1979. Later music directors and professional musicians in the parish wished to perform it again, but only under current Director of Music Woosug Kang was there the complete mix of time, talent, treasure, advocacy, and generosity to bring Amahl back to St. Philip’s. Producing a full orchestral version of Amahl started with an overarching vision of community in-gathering and diversity building, ably supplied by Woosug and the St. Philip’s Vestry. Woosug’s arrival at St. Philip’s in July 2012 brought about a renewed focus in children’s choir programs as well as elevating the quality of the adult choral programs.

Early in 2013, Dianne Iauco, a long-time parishioner and operatic professional, envisioned a wonderful collaboration between the adult and children’s choirs that made Amahl possible at St. Philip’s again. After hearing Dianne’s formal proposal, St. Philip’s Friends of Music committed to a full-blown, professional production of Amahl with the intent to create not only a festive, high-quality musical event but also offer a gift to the larger Tucson community—especially those who may never have experienced the excitement of a live, musical drama. The production drew upon the abundance of talent at St. Philip’s in the form of well-recognized professionals to perform, direct, and stage manage.

The Friends of Music nurtured the seed of this vision for six months. The Artistic Committee really wanted to offer the tonal richness of the orchestral version, which could not be replicated by the two-piano version of Menotti’s score. Dr. Tom Cockrell (current Nelson Riddle Endowed Chair in Music at the University of Arizona, Director of Orchestral Activities and Music Director of the University of Arizona Opera Theater) enabled the plant to grow by auditioning instrumental and vocal musicians, and selecting twenty of them for the orchestra and twenty-five vocalists. He also served as musical director for rehearsals and the performances.

Ava Galbraith, a member of the St. Philip’s St. Nicholas Choir, was exactly right for the energetic Amahl role. Dianne Iauco has performed the soprano operatic role of Amahl’s mother many times, knowing every twist and turn in the score. She sang the role with passion. The Three Kings were splendidly matched  with each singer’s actual personality. Matthew Holter is well known for his fabulous sense of comedy. In his hands, the hard-of-hearing King Kaspar had the comedic flair the role deserves. Larry Alexander’s artistic sensitivity highlighted the compassionate side of King Melchior, and Arizeder Urreiztieta’s stentorian delivery underscored the dignified and mysterious King Balthazar. In the role of the Page, University of Arizona student James Mendola (who has sung the role of Amahl) displayed a talent worth watching. Members of St. Philip’s adult and St. Nicholas Choirs, directed by Anne Boyer Cotton, filled chorus roles. The dancers were from the Division of Dance at the University of Arizona.

The vision developed with vocal and instrumental rehearsals, construction of sets and stage lighting, organizing of props, and carrying out the many planning and back office steps required to host a full-scale production: advertising, publicity, advance sales, contracting, hospitality, and house management. A great deal of enthusiasm developed for this opera to share its magic, beauty, and message of hope with Tucson. The preparations for the opera and the festivities around it became a joyous activity, filled with anticipation and excitement. 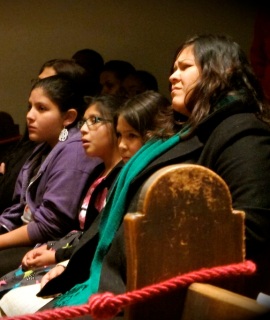 The vision came to fruition on January 11, 2014, at 4:30 and 7:30 p.m. performances. To encourage wider–Tucson community accessibility, admission was by free-will offering. In addition, participants in St. Philip’s After-School Music Program and their families, as well as students at Imago Dei Middle School, were invited to attend the dress rehearsal free of charge. Proceeds will support the music program for children and youth at St. Philip’s by providing scholarships for summer choral music workshops as well as instrumental and choral training during the school year.

When asked what a singer feels after a performance has ended, Dianne replied, “Amahl is a very favorite piece for me, so there is a letdown. But I am so uplifted by the results this particular performance brought. I felt somewhat responsible for the outcome and the results have gone far beyond my expectations. The coming together of St. Philip’s talents and resources made this project so rewarding.”

Parishioner Wayne Fulton was in the audience and provided his impressions:

In 1951, I was at home with my parents for Christmas and saw the announcement about a new opera written for TV about a crippled boy named Amahl and his gift to the Christ child. Even on a twelve inch TV screen in black and white, the message resonated with my mother and myself, and it became an annual event for us for several years. It had been many years since I had seen a production, until January 11, 2014. The Friends of Music production of Amahl and the Night Visitors was opera at its finest. In addition to the music, superbly played by the orchestra under the direction of Tom Cockrell, and sung by the principals and the chorus, the acting transported us in time and place to that desert hut where Amahl and his mother lived. The three kings, each with their individual personalities, gave depth to the story. And when Amahl’s mother stole a bit of the gold, the response was electrifying. Events unfolded quickly, and when Amahl left for Bethlehem with the three Kings, after the miraculous cure of his lame leg, the audience erupted with spontaneous applause. The Friends of Music deserve high praise for this production.