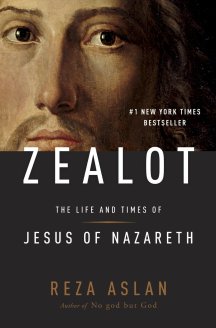 Zealot: The Life and Times of Jesus of Nazareth, by Reta Aslan. Random House, 2013

Zealot is an important book. There is probably a book a week published about Jesus of Nazareth, but this book goes to the head of the class. More about this importance later.

First, The High Drama. Zealot was published in the summer of 2013. Fox News sought out an interview with the author, Reta Aslan, most likely because Aslan is a Muslim. The interview was a constant attack, shaped in a question of disbelief by Fox that a Muslim couldn’t possibly write about Jesus in an unbiased way. Aslan, a noted historian of religion and scholar, calmly fielded this disbelief, noting the careful scholarship put into Zealot. Well, lo and behold the interview went viral via YouTube and was of course heard worldwide. The result? As of the first week of October, Zealot is ranked third on the New York Times hardback best-seller list. Thank you Fox.

Why is this book important? It is written by a historian who describes the cultural, political, and economic life in Palestine, and the Jewish community during the First Century, noting and highlighting Jesus of Nazareth’s place in that historical period. As a historian, and not a theologian, Aslan captures as noted in the title of his book, “the life and times of Jesus of Nazareth.” Aslan states his case early. To understand Jesus of Nazareth we need to first go to the end of the story, not the beginning: “But look closely at Jesus’ word and actions at the Temple in Jerusalem — the episode that undoubtedly precipitated Jesus arrests and execution — and this one fact becomes difficult to deny; Jesus was crucified by Rome because his messianic aspirations threatened the occupation of Palestine, and his zealotry endangered the Temple authorities.” (p. 79). Central to Aslan’s argument is that the centuries-old emphasis on Jesus the healer, comforter, friend, miracle worker, peace maker has resulted in the avoidance of Jesus, the political advocate and zealot fighting against both Roman and Jewish religious oppression of the poor, the marginal, and the outsider. “But Jesus’ message was designed to be a direct challenge to the wealthy and the powerful, be they the occupiers in Rome, the collaborators in the Temple, or the new moneyed class in the Greek cities of Galilee. The message was simple: the Lord God had seen the suffering of the poor and dispossessed; he had heard their cries of anguish. And he was finally going to to something about it.” (p. 96). This is what Jesus meant when speaking as the Son of Man, about the coming of the Kingdom of God. Finally, because Aslan writes as a historian, he dwells on the Gospel stories to enlighten the understanding of the life and times of the First Century.

This book is an excellent introductory book for confirmation, for people beginning to get a grip on the story of Jesus. It is an easy read, mostly narrative, the telling of a story, the one story that has impacted the ages more than any other.

One thought on “New Book in the Renouf/ Nelson Library: Zealot”