The group was very compatible and the expectations for the week were exceeded. All would conclude that the week, put together by Seth, was a marvelous learning experience in beautiful surroundings. Many hope to repeat the experience again next year. 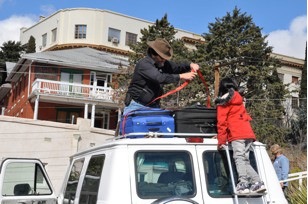 We assembled at the High Desert Market in Bisbee for a delicious breakfast early on Sunday morning. We then went up the hill to St. Johnʼs Church, Bisbee, to park our cars and load the minivans for the trip to Banamichi. Here we met Guillermo, our very talented head professor for the week. Seth, our organizer, and Lynn Mathews, one of our hosts at the hotel, drove us to Naco, where we obtained our one-week visas, had our luggage inspected, and changed our dollars to pesos. Georgina Gonzalez and Maria Elena Borquez, our other instructors, joined us in Naco.

Maria Elena took us to the Naco museum and presented to us the history of the area.  She discussed Mexico under the Spanish, under the French, and under Mexican rule. She showed us artifacts from the Mexican movements displayed in the museum.

The three hour drive to Banamichi, through the dry mountains of Sonora and across the Sonora River, was beautiful.  We passed high mountains with solid rock faces, gentle hills, and occasional green fields in the valleys.

Banamichi is a lovely, quiet, and safe pueblo in the heart of Sonora, Mexico, nestled among lovely mountains and hills. The only people who speak English are the owners of the two nice hotels and a few Canadian miners staying at the hotels. There are few cars. There is a diversity of rich and poor. There are charming children and friendly dogs everywhere.  It is an easy walk to small family run pharmacies, grocery and clothing stores —all ideal places to practice speaking Spanish. On several occasions we were invited into beautiful homes. The church is particularly attractive. We had drinks one evening and dinner another at La Posada, the other lovely hotel in Banamichi. There are a number of simple but good small restaurants in town. 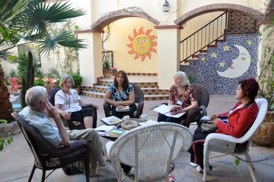 The class was held at Los Arcos, our extremely attractive hotel.  Los Arcos is run by Lynne and Tom Mathews, an American couple who have run the hotel for 5 years. It has a lovely courtyard, filled with plants and flowers and seating areas, where classes are sometimes held. Other times classes are held in the large dining room. The bedrooms are clean, comfortable, attractive, and quiet. The Mathews are supported by a staff of 3 local people who cook, clean, and serve meals. The staff also is available to do laundry.  Virtually all meals are Mexican and quite good.

Every day started with a prayer before breakfast, often led by students.  Later in the week there was a communion led by Seth and Mary, the rector of St. Andrew’s. The service took place in a lovely private home.

The class was divided into two sections according to proficiency. The sections met both separately and together.  When separately, one class met with Guillermo, the other with Georgina and Maria Elena. The teachers would alternate teaching both levels. Classes were almost entirely in Spanish.  Guillermo was one of the best professors many of us had ever had.  He spoke clearly, was patient with the students, and was always available. The content of the class material included such Hispanic cultural subjects as the Virgin of Guadaloupe, Spanish missionaries and the role of the Jesuits and Church, the former local Indian tribes, Spanish literature with discussions of Jose Marti and Pablo Neruda, Mexican music, and short films in Spanish.  We discussed the disparity between rich and poor, as well as government social programs for the poor in every town. We wrote poems in Spanish as an excellent way of building vocabulary and reviewing grammar. 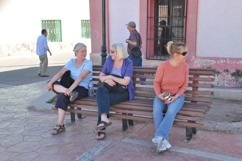 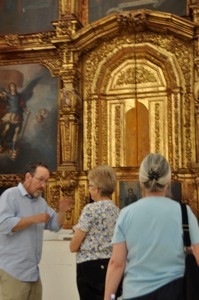 We enjoyed several useful excursions. Seth and the professors led us around town to speak in Spanish to the various shop owners and to the children. His easy rapport with the Spanish community is a major reason for the success of our Spanish immersion program. One afternoon we hiked outside of town past an old mill that formerly served the town. Another afternoon we went to the neighboring pueblo of Arizpe, the old Spanish capital of the area, to visit the central plaza with the old clock tower, and the old church and remains of Fr. Junípero Serra, the Spaniard Jesuit who helped found San Francisco, California. Again we visited local shops and an historical museum. 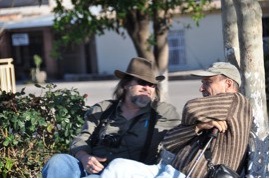 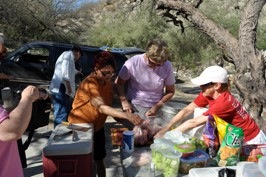 One afternoon we went to Agua Caliente for hot spring baths, followed by a picnic of carne asada. We were accompanied by Lulu, a Ph.D. from the Basque area of Spain, who is studying the role of the Basque Jesuits in Sonora.  On the way home we stopped in a small town to see another attractive church and to try Spanish deserts from a local street vendor.

Herberto Corellla Yesces, a local rancher, brought his son to a dinner.  He described how it was to grow up in Banamichi. After living many years with his wife in a big city, he described what it is like to return to Banamichi to raise his children. Another guest was Mitch, a Canadian miner, who with his team of three men are drilling core samples in the surrounding mountains looking for silver, gold, and other metals.  He discussed how agreeable it is for a non-Mexican to live for a long period in this town. One day Daren, the American owner of the other nice hotel, came to discuss his positive experiences living in Banamichi. And Georgiana shared the pictures of her attractive family in Naco.

On the last day we had an especially fine dinner in the courtyard of Los Arcos, followed by a talented folklorico dance team from the local high school, complete with colorful costumes. We were told the troupe will be performing for several days in Tucson in October. Jerry Sandvig reported on his study of vital data of Banamichi. Guillermo read student poems and presented the students with their graduation diplomas. Then all enjoyed a delightful slide show of our weekʼs activities, accompanied by music — all arranged and created by Seth. The evening closed with music by our hotel host, Tom, and a  synopsis of Mexican movies projected on a screen. 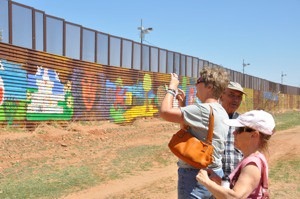 On the way back to Bisbee we stopped where Maria Helena presented cloth items made by poor local women. Numerous purchases by our group were made. We then visited the wall. On the return students talked with Seth about their experiences.  Virtually all said they would like to return next year. They said Seth was to be congratulated on a program which exceeded their expectations.