The Rev. Vicki K. Hesse, newest member of St. Philip’s staff clergy, was ordained to the Sacred Order of Priests on Saturday, December 8, 2012. An ordination is a very special kind of service — liturgically complex, long, inspiring, full of symbolic action and meaning-filled ritual. Vicki’s ordination was no exception.

The ordination was celebrated by the Rt. Rev. Kirk Stevan Smith, Bishop of Arizona. Although he was acting on behalf of the Rt. Rev. G. Porter Taylor, Bishop of the Diocese of Western North Carolina, which was Vicki’s diocese of canonical residence, Bishop Smith joked that Bishop Taylor was not altogether happy with him. Bishop Taylor wrote “I am very sad to not be able to place such a talented person as Vicki here, but the only thing that makes this okay is my admiration of and respect for Bishop Smith.” Western North Carolina’s loss is definitely St. Philip’s and the Diocese of Arizona’s gain.

Persons who are chosen and recognized as being called by God to the ordained ministry are admitted to the sacred order of priests (as well as the sacred orders of of bishops and of deacons) by solemn prayer and the laying on of hands. In the ordination of a priest, the participation of at least two presbyters along with the bishop is required. Thus, ordination is not an act by the bishop alone but an act of the Church, represented by the bishop, the presbyters, and the lay people in attendance. Those in attendance, the assembly, act in concert with its leaders to make the ordination a reality.

The opening procession of an ordination liturgy often uses the hymn “I bind unto myself today,” known as “St. Patrick’s breastplate.” Its lyrics are inspired by St. Patrick and his 5th-century ministry in Ireland, written in the style of a prayer for protection on a journey. Vicki, as is customary, began the service in baptismal garb. Her bare feet symbolized Moses’ experience of the burning bush: “remove the sandals from your feet, for the place on which you are standing is holy ground.” (Exodus 3: 5).

The ordination service begins with the presentation. Mentors, colleagues, friends, and other important people in the ordinand’s life present the ordinand and attest to her fitness and preparedness to be ordained. The ordinand signs a declaration, which is witnessed and signed by the presenters.

The Litany for Ordinations follows the presentation. This set of sung prayers both focuses on the ordinand and also includes all bishops, priests, and deacons; all of the faithful and those who do not believe; the mission of the Church; peace for the world and wisdom for its leaders; protection for those who are poor and suffering; and grace for those who have died. 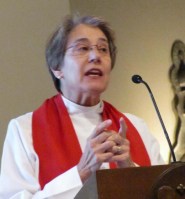 The Liturgy of the Word includes readings and a psalm. At Vicki’s ordination, the Gospel was chanted by the Rev. Anne Strong, deacon. Next, the Rev. Charlotte D. Cleghorn, who had been head of Vicki’s discernment committee, provided an inspirational sermon. After bringing greetings from the Rt. Rev. Porter Taylor, Bishop of Western North Carolina, The Very Rev. Todd Donatelli, Dean of the Cathedral of All Souls, Vicki’s sponsoring parish, and the Rev. Rob Lundquist, Rector of the Church of the Holy Family, where Vicki did her internship, the Rev. Cleghorn took inspiration from the work of Dr. Brene Brown, a sociologist who is an expert in the field of shame and vulnerability. On a recent radio show, Dr. Brown had talked about living from a place of vulnerability, courage, and whole-heartedness; in particular, vulnerability being the heart of meaningful human experience. The Rev. Cleghorn called Vicki to be willing to be seen as a person who happens to be a priest, not a priest who happens to be a person. At the conclusion of the sermon she asked Vicki to stand as she administered her own set of ordination vows, asking Vicki, among other things, to live from her authentic self, to live courageously, knowing that courage is borne out of vulnerability, and to live whole-heartedly. (The sermon is available here.)

In place of the Creed, the congregation renews their baptismal vows and then participates in a ritual called the Asperges. Through the Asperges, congregants are reminded of their own Baptism as they are sprinkled with holy water by the Bishop and other clergy via rosemary boughs.

Next in the service is the Examination and Consecration, beginning with the ordinand vowing agreement to a set of questions posed by the Bishop. Afterwards, the congregation prays for the presence of the Holy Spirit. At Vicki’s ordination, she assumed a prostrate position, representing a kenotic, or self-emptying, spirituality in preparation for being filled with the Holy Spirit in service to our living God. Prostration symbolizes complete submission to a greater authority, “flat out for God,” as Abram felt compelled to be when God announced his new covenant relationship with him (Genesis 17:3). Next the ordinand kneels before the Bishop for the Prayer of Consecration, while other presbyters present gather around and lay hands upon the head of the ordinand. After a loud “Amen!” from the congregation, the Bishop anoints the new priest’s hands, consecrating and sanctifying them so that they in turn may bless and consecrate. 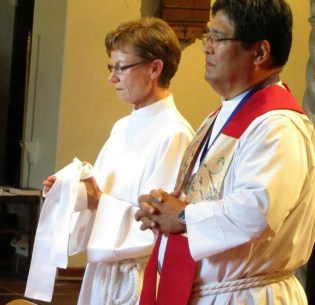 Another inspiring and meaningful ritual at Vicki’s ordination was the binding of the hands by the Rector, which reflects the solemn commitment of the ordinand to bind herself to Christ, her hands to sacramental service, and her ministry to the Episcopal Church and the Anglican tradition.

The binding cloth is called a “maniturgia,” and at Vicki’s ordination it was embroidered with the prayer “Veni, Sancte Spiritus / Come, Holy Spirit.” Karen Penn, from St. Philip’s Altar Guild, made and hand-embroidered Vicki’s maniturgia. It also bore the image of a Celtic cross and dove.

Finally, the new priest is clothed in priest vestments and presented a Bible by the Bishop. The new priest offers the Peace of the Lord to the congregation. At the Eucharist which follows, the new priest helps distribute communion to the people.

The service concludes with the new priest blessing the congregation. It is also considered a special spiritual gift to receive an individual blessing from the newly ordained priest after the service.

Of course ordination often includes another, less formal, celebration that includes refreshments (which at Vicki’s reception included Eegee’s in addition to champagne) and presentation of gifts to the new priest.

Bishop Smith’s delight in celebrating the ordination was obvious. “Priests get to do weddings, and bishops get to do ordinations,” he explained. It was definitely a joyous time for everyone present.