On January 8, 2011, a gunman opened fire at a northwest Tucson Safeway store, killing six and injuring thirteen. The anniversary of that date is a somber day for Tucsonans, made especially so this year by the shootings this past December at an elementary school in Newtown, Connecticut.

At 10:10 a.m. on January 8, 2013, citizens of Tucson were asked to ring bells to mark the time the shootings occurred. At St. Philip’s, the Tuesday morning healing service began at 10 a.m. The Rev. Allen Breckenridge, the Celebrant, read these words: “Inspired by the words of Tennyson, we are hoping that this simple gesture will allow all Arizonans to ‘ring in the common love of good’ as we commemorate the six people killed and thirteen injured on January 8, 2011; the victims’ and survivors’ families and friends; the inspiration of our community’s responses; and the worldwide support for all communities affected by senseless shootings.” He then led the congregation in singing Dona Nobis Pacem, read the names of the victims, and asked for silent prayer. At 10:10 the tower bells began tolling. The nineteen chimes seemed to last an eternity — no doubt longer than the shooting itself.

The Tucson community was invited to a special Evening Prayer service at St. Philip’s at 7 p.m. on January 8. The service had originally been conceived as an opportunity to remember the Tucson tragedy, heal, and move forward. After the Newtown shootings, the service was expanded to embrace all those shocked and saddened by senseless violence. The liturgy, consisting of prayers, scripture, and music, was woven together from a variety of sources, including several collections of prayers from the World Council of Churches, the Episcopal Book of Common Prayer, and the New Zealand Prayer Book. Music, drawing from southern US and English folk melodies, was composed and arranged by Sheldon Curry, St. Philip’s composer-in-residence, and performed by a collection of instrumentalists including flutes, clarinet, harp, cello, guitar, and percussion, with Curry on the piano. 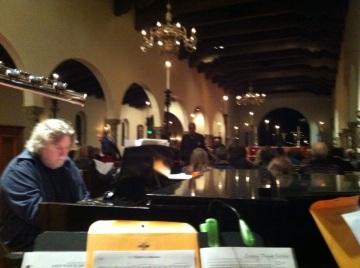 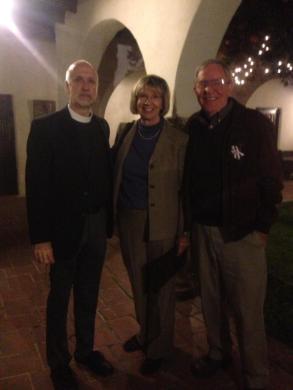 Pam Simon, former Outreach Coordinator for Congresswoman Giffords and a survivor of the shootings, spoke eloquently about her injuries on January 8, her experiences in recovering, and how they have shaped her life since then. Her homily used the theme of “Epiphany” to illustrate her sense of insight as she traveled out of her dark journey of grief, discovering a mandate to work for change. She called for better funding for programs to provide help for mental illness and help reduce its stigma, and she described an initiative called Demand a Plan, in which January 8 survivors have joined with Mayors Against Illegal Guns to promote sensible gun regulation.

Simon closed with an inspiring challenge to all of us. Her most significant epiphany is that she wakes up each morning with gratitude for another day to be alive. In honor of the light given to our world by Christina-Taylor Green, Dorothy Morris, Dorwan Stoddard, Phyllis Schneck, Judge John Roll, and Gabe Zimmerman, she asked that we each watch for an epiphany, an inspiration to be part of the change for good … and to live each day in gratitude.

As worshippers processed out of the Church singing “We Shall Overcome,” they were greeted by a display of pillar and votive candles pointing the way to St. Philip’s labyrinth. The candles had been set up by parishioner William Kendall. 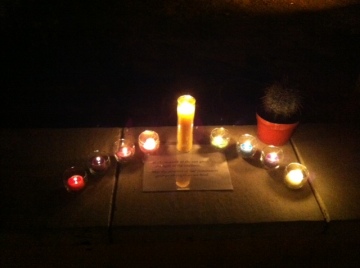 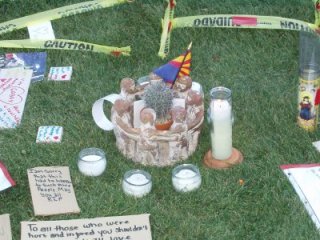 Soon after the shootings in 2011, a memorial was established at University Medical Center. At that memorial, Kendall set up a circle-of-friends encircled by a 7-candle “Menorah.” He placed a small saguaro in the center of the circle-of-friends, along with the Arizona State flag, and fabricated a facsimile of a hospital wrist band, on which was printed “as the warmth of the sun gives strength to the saguaro, may the prayers and thoughts of your community give you strength as you heal.” The printing was in navy blue for Giffords’ astronaut husband Mark. The tall pillar candle was the first candle to be placed and represented the sun shining down on the saguaro. Kendall visualized the hundreds of lit candles around it as a field of stars. He explains, “For the first several nights I would return to add another candle. Someone saw that I was returning time and time again and I was asked to help light (re-light) the multitude of candles that had been left. So night after night I returned until the memorial was removed. The memorial really was a beautiful sight and I still think of it whenever I drive by.”

Two Tucson TV stations, KOLD and KVOA, reported on the Evening Prayer service, and the candle display was a featured image in the coverage.