Reflections of a Rookie Youth Leader on Pilgrimage

To think, 18 months ago I filled out an interest sheet asking if I would be willing to help St. Philip’s youth groups by cooking, washing dishes, etc. Fast forward and I’m on a plane with nine 15- to 16-year-olds winging my way to Europe for a 2-week pilgrimage. It has truly been an amazing journey, especially at my age. Along the way I have had many of my questions and prayers answered.

The many Cathedrals we visited and church services we attended gave the youth of J2A a wonderful opportunity to learn about their religious heritage and to reflect on what their God and religion means to them. The week spent at Taize, France, allowed the youth to experience the Triune God in a wonderful setting by attending prayer services three times daily, and interacting with youth from many different countries through Bible reflections, discussions, and participating in group exercises. It was truly a unique opportunity. For the youth, it wasn’t only a once-in-a-lifetime religious experience but also an opportunity to get out into the real world on their “own” in a foreign country setting. They were not only responsible for themselves but also to the group. They each were presented challenges along the way and had to work through them. I feel the youth of J2A represented themselves and St. Philip’s in an exemplary manner throughout the pilgrimage. 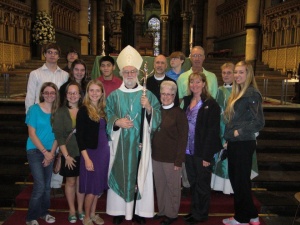 J2A pilgrims and leaders with the Archbishop of Canterbury, the Most Rev. Rowan Williams, and Canon Clare Edwards

As for me, the most meaningful group experience was the candle light tour at Canterbury Cathedral, led by Canon Clare Edwards. It was as if we were one body moving through the dark, our way lit only by fourteen candles, as Canon Claire sang, chanted, and painted wonderful pictures and told stories of days gone by. It was a very emotional and wonderful experience for all! My week at Taize was the most meaningful individual experience. I learned many things about myself, but the most important lesson I learned was about prayer. It isn’t just asking God for something, which I hadn’t really done much of. Prayer, I found out is a two-way conversation and if you just listen, it is truly amazing what God might say to you. The long periods of silence at the Taize prayer services allowed for this interaction with God. Many of my prayers and questions were answered, especially ones concerning myself and youth ministry. The one question God didn’t answer was “why me, why now, why not 10 or 20 years ago?” I finally stopped asking and just decided to go with it, for as long as he allows me to.

I am very much looking forward to working with the next J2A group and taking them on pilgrimage in 2 years, not as a rookie but as an experienced veteran. The youth of St. Philip’s are the future of the church. They certainly give to me more than I could ever possibly give to them. However, that will never stop me from working to be the best leader that I can be for them. 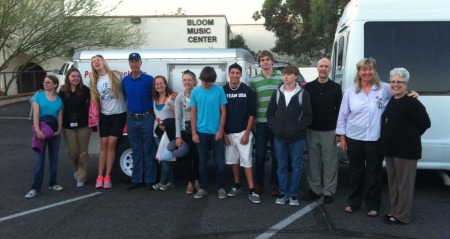 Thoughts on my Daughter’s J2A Pilgrimage to England and France

My daughter, April, just returned from the J2A pilgrimage where she and her fellow pilgrims visited holy sites in England before crossing over to France to participate in worship activities at Taizé. My other daughter, Theresa, participated in the J2A Pilgrimage in 2008, and thus April had some idea of what to expect. But of course, pilgrimages have to be experienced to be understood. Not surprisingly, April had a wonderful time, learned history about the Anglican Church, and got to meet other young Christians from Germany, Italy, and France. Moreover, she became much closer to her fellow pilgrims and the J2A youth leaders. These aspects of the trip are easy to discern. However, the purpose of the journey was much more than to increase her knowledge of European history and have a good time. The J2A Pilgrimage separates oneself from the familiar and allows one to contemplate how Christian faith plays a role in his/her life. To what extent that objective was accomplished is difficult to measure as such things are not as easily put into words by teenagers or adults. I imagine that for April and the other J2A youth, they are still absorbing the wonderful experiences of the trip and spending more time thinking about what it means to be a Christian in the modern world. Pilgrimage gave them the time to slow down and contemplate the things that are truly important in life.

The J2A Pilgrimage is a 2-year commitment made by the youth and their parents that involves substantial fund-raising activities to help pay for the cost of the trip. Fund-raising activities range from the selling of Christmas wreaths to providing food and drink at the fall Outdoor Art Show and Lenten Suppers. Fortunately, different groups within St. Philip’s outside the Youth Program help J2A in these activities. By working together for 2 years, J2A youth and parents become much closer. One of the benefits of fundraising for me was getting to see a sense of fellowship develop within our group as we tackled unexpected challenges of the past 2 years.

Approximately 6 months into our 2-year pilgrimage commitment, our Youth Program Director was laid off at St. Philip’s due to the budget shortfall. Several families and youth leaders left the church at this time as well. Rumors soon spread that there would not be a J2A Pilgrimage in 2012, despite the fact that we had already began to raise funds for the trip. I personally had doubts that the J2A Pilgrimage would take place. These were troubling times for all of us.

In times of trial we are defined not only by what we say, but more importantly, by what we do. Members of St. Philip’s rallied and came together to make sure that the Youth Program would not fade away, and that J2A Pilgrimage would indeed take place in 2012. Under the guidance of Alison Lee, parishioners and church staff offered precious time and talent to make sure that J2A had a new set of leaders and that Pilgrimage would continue as planned. J2A parents also stepped up to the plate by taking a greater role in decision-making and handling logistics regarding the various fundraising activities and making reservations for travel and lodging. During this time of turmoil, J2A was a relatively small group of seven families, but we were determined to meet our fundraising obligations and make sure that these youth would not be denied the privilege of Pilgrimage.

After an uncertain spring and summer in 2011, things began to fall in place. Virginia Kat, Eric Wilhelmi, and Allan Cooley volunteered to be the new J2A leaders, and Greg Foraker and Ruthie Hooper agreed to serve as clergy chaperones for the trip. Two new families also joined our ranks and quickly became part of our fundraising team. Despite busy lives and the challenge of balancing work, school, and family, J2A parents got the work done. Before I knew it, the youth and leaders were boarding the shuttle to Phoenix Sky Harbor Airport to begin their spiritual sojourn.

While April was on her trip, I wondered how she felt being so far from home. I tried to envision her visiting holy sites in a landscape so smooth, lush and green … so different from the desert of southern Arizona. I wondered how she interacted with Christian youth her age from other countries while at Taizé. What did they have in common? What was it that brought them to this place? I also pondered how such a trip would have affected me if I had participated in a pilgrimage when I was 16. How might it have influenced my perception of the world and my faith?

Looking back, I feel honored to have worked with the J2A parents and leaders, and proud that despite a storm of uncertainty we were successful in sending these kids on pilgrimage with wonderful leaders and chaperones. I’m grateful to all of the members of St. Philip’s who have contributed towards this tradition, and I hope that our J2A pilgrims get the opportunity to do the same for their children (and other youth) in the future.

One thought on “J2A Thoughts”